Voting for Roger P. is easy!
Simply share this page on social media to make your vote count. Below, you’ll see Facebook, Linkedin, Twitter, Tumblr and Google+ icons. You can share once on each of these platforms, and each vote counts! If you are unable to share on social media, you can submit your vote on our blog’s contact page. Voting closes on 12/30! Votes made after the deadline will not be counted.

Be sure to read all our heroes’ stories here. 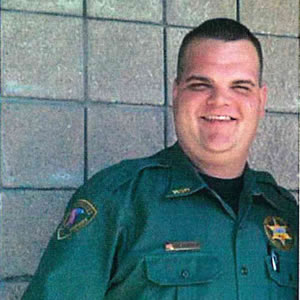 Roger has been a deputy sheriff for the past 5 years. He was destined for public service, starting his career as a volunteer firefighter at 18, then as a volunteer deputy while having a full-time job. Roger is also very involved with the Red Cross. He received certification from the OSU fire service while still in high school.

Roger dedicated many years to the Brushy Mountain Fire Dept. During a wildfire, with a year-long drought working against him, Roger drove the only running water truck to nearby houses, until neighboring departments could help. His efforts saved 5 families’ homes.

In 2004, Roger joined with American Red Cross to help Hurricane Katrina evacuees from New Orleans relocating to Oklahoma. Locally, Roger was the Disaster Action Team Leader, responding to fires within the four counties he was in charge of. Roger’s family tells us that he takes time out of his schedule to volunteer as a senior counselor at Oklahoma boy’s state and has been since 2004. As counselor in charge of Police academy, he shows teenagers the aspects of the duties of police officers.. Roger also works with local business for sponsorships for students to participate each year.

In 2008, Roger joined the Muskogee County Sheriff’s Office as a Reserve officer. Colleagues of Roger say they can always count on him, no matter what time, day or night. Roger speaks and visits local schools to talk and interact with children about Law Enforcement.