San Mateo, CA, June 8, 2016 … After sorting through more than 2,000 entries, the winners of the 2016 Spring Create Real Impact awards, presented by Impact Teen Drivers and California Casualty, have been announced.

Grand prizes were awarded for:

Based on the number of entries, winning schools were Lambert High School in Suwanee, Georgia; Our Lady of Lourdes Academy in Miami, Florida; and Beavercreek High School in Dayton, Ohio.

The contest encourages peer-to-peer messages and creative expression from students to help stem the tide of distracted and reckless driving, the number one killer of young drivers.

Students ages 14-22 were invited to address this critical teen driving danger with essays, artwork, videos and music. Winners were determined by a panel of judges and by online voting for prizes ranging from $500 to $1,500.

The winning entries can be viewed at www.CreateRealImpact.com.

"The Create Real Impact contest is a creative way to empower youth to develop life-saving messaging which is both relevant and effective at reaching peers in their social media comfort zone," said Kelly Browning, Ph.D., Executive Director, Impact Teen Drivers.

Impact Teen Drivers has reached more than two million teens since 2007 and the Create Real Impact contest began in 2009. California Casualty is a founding partner of the nonprofit and continues to provide support for the contest. California Casualty representatives will help present checks to the winning schools and awardees.

"The importance of this contest can't be overstated," said California Casualty CEO Beau Brown. "While insurance can replace a mangled vehicle, we can't replace a teenager's life. In a split second, everything for that family changes forever; it's a terrible tragedy that no one should endure."

The 2016 Fall Create Real Impact contest will take place August through October. Entries will be taken at www.CreateRealImpact.com.

Headquartered in San Mateo, California, with Service Centers in Arizona, Colorado and Kansas, California Casualty provides auto and home insurance to educators, firefighters, law enforcement and nurses across the country. Celebrating 100 years of service, California Casualty has been led by four generations of the Brown family. To learn more about California Casualty, or to request an auto insurance quote, please visit www.calcas.com or call 1.800.800.9410. 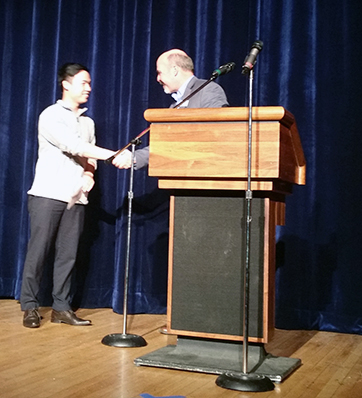