San Mateo, CA, October 8, 2014. . . As the school-year gets rolling, many districts are faced with the challenge to balance the many financial needs of their student-based programs.  If your public high school's athletics program is in need of funding, apply for a 2015 California Casualty Thomas R. Brown Athletics Grant. In the past three years, California Casualty has awarded more than $300,000. Guidelines and application forms can be found at www.CalCasAthleticsGrant.com.

California Casualty will award numerous grants this year, in amounts of $1,000-to-$3,000, to public high schools across the nation that demonstrate the most need. Entries for the 2014-2015 academic year must be received by January 15, 2015 for consideration.

Applicants must be a current member (or referred by a member) of the National Education Association (NEA) or one of the state NEA affiliates, or one of our other participating educator associations including ACSA, CASE, COSA, KASA, NASA, UASSP, as well as be an active employee of the public high school for which funding is sought. Schools in AK, HI, MA, MI, NY and WI are not eligible. Awardees will be announced in May. Official rules and applications can be found at www.CalCasAthleticsGrant.com.

The Thomas R. Brown Athletics Grant program was established to counter budget cuts that drastically impacted support for school athletics, in some cases forcing programs to shut down. Past California Casualty Chairman, Thomas R. Brown, an avid sportsman and athlete believes teamwork and competition help foster positive attitudes and success for student athletes. "Not having sporting opportunities could severely affect many students' future prospects," he said.

Headquartered in San Mateo, CA, with Service Centers in Arizona, Colorado and Kansas, California Casualty provides auto and home insurance to educators, firefighters, law enforcement and nurses across the country. Celebrating 100 years of service, California Casualty has been led by four generations of the Brown family. To learn more about California Casualty, or to request an auto insurance quote, please visit www.CalCas.com or call 1.800.800.9410. 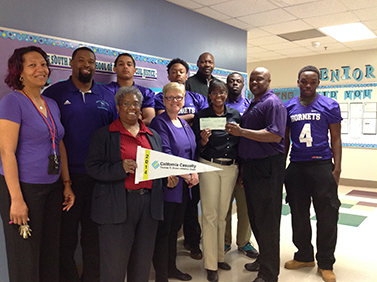