San Mateo, CA, June 1, 2015 … The 2015 school year wrapped up in grand style as California's 373 Gold Ribbon Schools were recognized during a series of regional ceremonies held across the Golden State. As the Presenting Sponsor, California Casualty was proud to attend and help celebrate their accomplishments.

Superintendent Torlackson noted the important role California Casualty has taken in honoring schools that have advanced excellence in education.

California Casualty CEO Beau Brown remarked what a privilege it was to play such a key role in acknowledging the achievements and successes of California educators and their schools. "Our partnership with the California Department of Education is a testament of how schools, businesses and communities can come together to promote the remarkable successes of those developing the minds of our future generations."

Gold Ribbon Schools were chosen for embracing rigorous academic standards while providing excellence and creativity in teaching and creating a positive school environment.

As the Presenting Sponsor, California Casualty is also making possible these other 2015 California School Recognition Programs:

"Since we partnered with the CTA in 1951, California Casualty has been vested in helping California educators in their passion of making a difference for their students," said California Casualty Senior Vice President Mike McCormick. "It's an honor to help recognize the everyday heroes who educate our children and make our communities better."

Headquartered in San Mateo, CA, California Casualty provides auto and home insurance to educators, firefighters, law enforcement and nurses across the country – American heroes who enhance their communities. Celebrating 100 years of service, California Casualty has been led by four generations of the Brown family. To learn more about California Casualty, or to request an auto insurance quote, please visit www.calcas.com or call 1.800.800.9410. 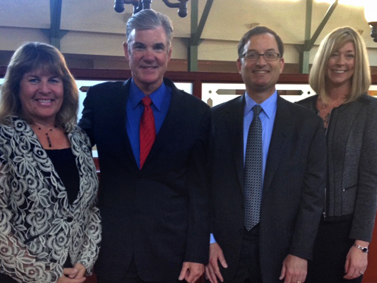