The contest is open to peace officers, EMTs and firefighters, American heroes who work hard and risk their lives to make our communities safer. Entries will be taken November 3, 2014 through October 7, 2015 and the entry form and rules can be found at http://go.calcas.com/harley.

Previous "Work Hard/Play Hard" winners include Pennsylvania firefighter Robert LaMantia who is riding the Harley-Davidson® Forty-eight he won in in March 2012. Nebraska firefighter Tom Vail took the $10,000 option when he won the contest in August 2013. Other California Casualty "Work Hard/Play Hard" winners have received personal water craft and all-terrain vehicles.

"First responders are every day heroes who don't always get recognized," said California Casualty Vice President Mike McCormick. "This is a thank you for all the hard work you do."

The Road King, with timeless cruiser styling combined with all the features for the long haul, can be yours with the California Casualty "Work Hard/Play/Hard" contest. Entry forms and complete contest rules can be found at http://go.calcas.com/harley. A winner will be announced in October 2015.

Headquartered in San Mateo, CA, with Service Centers in Arizona, Colorado and Kansas, California Casualty provides auto and home insurance to educators, firefighters, law enforcement and nurses across the country. Celebrating 100 years of service, California Casualty has been led by four generations of the Brown family. To learn more about California Casualty, or to request an auto insurance quote, please visit www.CalCas.com  or call 1.800.800.9410. 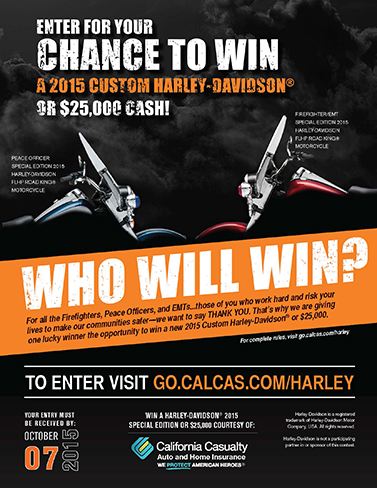