Reaching the century mark is a noteworthy achievement, especially considering that only 13 percent of family-owned businesses are viable by the third generation. For California Casualty, the 100th anniversary signifies the company’s financial strength, enduring relationships, and high customer satisfaction – characteristics quickly established by its founder and carried forth by subsequent generations.

“There are key ingredients to our success,” Beau Brown said. “Our corporate culture helps to attract and retain customer-focused employees. Because our insurance companies are policyholder-owned, we can make decisions that are best for the long term rather than the short term. Our group relationships, cemented over a long period of time, allow us to effectively compete against larger insurance companies.”

The 100th Anniversary website, www.calcas100.com features a detailed historical timeline, extended commentary from customers and partners, and a look at each generation of leadership. The video, “A Century of Service” includes historical footage, with Beau Brown and other company executives reflecting on California Casualty’s origins and century of growth. The website will continue to evolve throughout the year.

For more information, contact Robin Freese at 719-532-8440 or rfreese@calcas.com 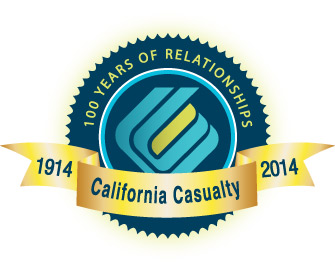 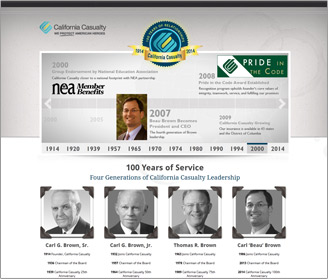