San Mateo, CA, September 25, 2014 … EMT Joe Peters was nearly in tears as he was announced the latest winner of the California Casualty Work Hard/Play Hard contest. Joe took the $10,000 cash option instead of a new Harley-Davidson® Seventy-two. Joe's name was picked from more than 14,000 entries from across the country.

Joe is an EMT with the Coast Life Support District in Gualala, California, and learned of the life-changing prize during a surprise staff meeting. His girlfriend convinced him to take the cash. Joe is finishing fire training courses at Santa Rosa Community College, an hour-and-a-half drive from his home in Gualala. He's been working part-time jobs to help pay for college and his commute.

The California Casualty Work Hard/Play Hard contest is a thank you to public safety heroes who work hard and risk so much to make our communities safer. "This award is the least we can do to show first responders how much we appreciate all they do," said California Casualty Vice President Mike McCormick.

California Casualty provides auto and home insurance to American heroes – including law enforcement officers, firefighters and EMTs – men and women who put their lives on the line each and every day.

Who will win the next California Casualty "Work Hard/Play Hard" contest? Information can be found at http://go.calcas.com/harley, with a winner announced March, 2015.

Headquartered in San Mateo, CA, with Service Centers in Arizona, Colorado and Kansas, California Casualty provides auto and home insurance to educators, firefighters, law enforcement and nurses across the country. Celebrating 100 years of service, California Casualty has been led by four generations of the Brown family. To learn more about California Casualty, or to request an auto insurance quote, please visit www.CalCas.com  or call 1.800.800.9410.

*Harley-Davidson is a registered trademark of Harley-Davidson Motor Company, USA. All rights reserved. Harley- Davidson is not a participating partner in or sponsor of this contest. Complete rules are available at http://go.calcas.com/harley. 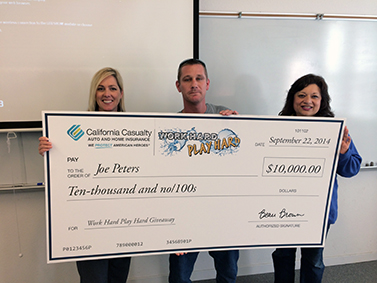