Tens of Thousands Pledge to Drive Focused with Us
For Immediate Release
Mark Goldberg, 719.532.8436
mgoldberg@calcas.com

Tens of Thousands Pledge to Drive Focused With California Casualty

San Mateo, CA, April 1, 2017 – More than 40,000 educators across the country have met California Casualty’s challenge to take a pledge to not drive distracted. While it’s a good start, it’s not enough; 2016 saw a marked increase in the number of fatal crashes, reversing a decade long decline. That’s why California Casualty’s Promise to Drive Focused campaign is more important than ever.

Safety groups warn that a large majority of distracted driving crashes involve younger drivers. California Casualty is reaching out to NEA members through social media, group publications and face-to-face conversations at schools and state conventions, encouraging them to become a positive role model for their students and families. Teachers, administrators and educational support professionals who go to www.drivesafepromise.com and make the commitment to drive focused will become eligible to win a new Ford Focus*.

The drive focused initiative compliments the efforts of Impact Teen Drivers, a non-profit founded and supported by California Casualty, working to put an end to inattentive driving. With distracted driving the number one killer of teens, educators know all too often the emotions associated with poor choices behind the wheel.

“We are dedicated to protecting educators,” said California Casualty Sr. Vice President Mike McCormick. “Each promise to drive focused creates safer roads for them, their families and their students.”

The National Safety Council believes we can all reverse the trend because traffic fatalities and injuries are preventable, and a coordinated effort can get Americans on the right road to reducing traffic deaths.

Since April is National Distracted Driving Awareness Month, now is the time for K-12 educators and administrators to do their part to prevent needless tragedies and enter to win at www.drivesafepromise.com. The year-long campaign ends September 1, 2017, with the new car winner announced in September or October of 2017.

*Ford Motor Company is not a participating partner in or sponsor of this contest. 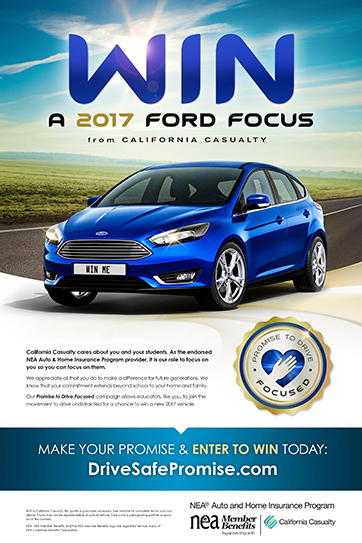