It's time to get the job done and enter California Casualty's Work Hard/Play Hard "All In" DeWALT® Sweepstakes. Entries must be received by September 16, 2016 for consideration at http://go.calcas.com/dewalt.

One lucky first responder will be routing, sawing and assembling to the max with the ultimate tool kit filled with $10,000 worth of DeWALT® guaranteed tough tools. We're talking a generator, compressor and all the power saws, wrenches, compressors, drills, and accessories anyone could ever need or use.

The Work Hard/Play Hard drawing is open to peace officers, EMTs and firefighters; American heroes who work hard and risk their lives daily.

"We want to show first responders how much we appreciate all that they do by giving them the opportunity to destress and blow off some steam," said California Casualty Sr. Vice President Mike McCormick.

Imagine never having to borrow a tool again. Time is running out to enter California Casualty "All In" DeWALT® Sweepstakes at http://go.calcas.com/DeWalt. The deadline to enter is September 16, 2016, with a winner announced in October.

*DeWALT® is a registered trademark of Stanley Black & Decker. All rights reserved. DeWALT® and its parent companies are not participating partners in or sponsors of this contest. 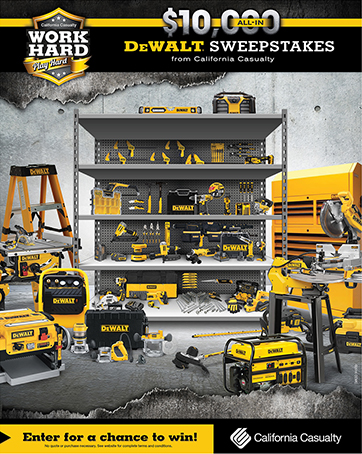